Matisse and Picasso achieved extraordinary prominence during their lifetimes. They have become cultural icons, standing not only for different kinds of art but also for different ways of living. Matisse, known for his restraint and intense sense of privacy, for his decorum and discretion, created an art that transcended daily life and conveyed a sensuality that inhabited an abstract and ethereal realm of being. In contrast, Picasso became the exemplar of intense emotionality, of theatricality, of art as a kind of autobiographical confession that was often charged with violence and explosive eroticism. In Matisse and Picasso , Jack Flam explores the compelling, competitive, parallel lives of these two artists and their very different attitudes toward the idea of artistic greatness, toward the women they loved, and ultimately toward their confrontations with death. 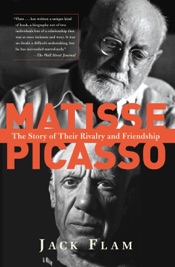