The NHL’s New York Islanders were struggling. After winning four straight Stanley Cups in the early 1980s, the Islanders had suffered an embarrassing sweep by their geographic rivals, the New York Rangers, in the first round of the 1994 playoffs. Hoping for a new start, the Islanders swapped out their distinctive logo, which featured the letters NY and a map of Long Island, for a cartoon fisherman wearing a rain slicker and gripping a hockey stick. The new logo immediately drew comparisons to the mascot for Gorton’s frozen seafood, and opposing fans taunted the team with chants of “We want fish sticks!”

During a rebranding process that lasted three torturous seasons, the Islanders unveiled a new mascot, new uniforms, new players, a new coach, and a new owner that were supposed to signal a return to championship glory. Instead, the team and its fans endured a twenty-eight-month span more humiliating than what most franchises witness over twenty-eight years. The Islanders thought they had traded for a star player to inaugurate the fisherman era, but he initially refused to report and sulked until the general manager banished him. Fans beat up the new mascot in the stands. The new coach shoved and spit at players. The Islanders were sold to a supposed billionaire who promised to buy elite players; he turned out to be a con artist and was sent to prison. We Want Fish Sticks examines this era through period sources and interviews with the people who lived it. 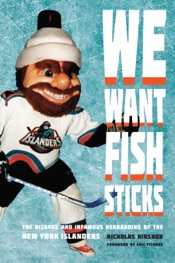