The Absolutely Last Official Polish Joke Book, by Larry Wilde.
The latest e-book release in The Larry Wilde Joke Book Series by Laugh.com!
See why The New York Times has dubbed him; “America’s Best Selling Humorist”.
JUST WHEN YOU THOUGHT YOU’D HEARD THEM ALL!
An irresistible collection of side-splitting gags and guffaws that will leave you lame with laughter!
HAVE YOU HEARD ABOUT THE POLISH GODFATHER?
HE’LL MAKE YOU AN OFFER YOU CAN’T UNDERSTAND.
WACKY! WONDERFUL! BOISTEROUS! BAWDY!

In spite of the high priority for telling many types of yams with ethnic overtones, the Polish joke craze continues unabated. No other gag fad—elephant jokes, sick jokes, shaggy dog jokes, good news/bad news jokes, etc.—has lasted as long or evoked as much controversy.
How come?
The humor of ridicule evokes belly laughs. Not smiles or chuckles or titters but genuine, real, from-the-gut guffaws. (Only material of a sexual nature garners greater audience reaction.)
For whatever psychological reasons, it seems to be part of human nature for most people to put down others in such a way that it makes them feel superior. The most powerful thrust in comedy is mockery. In ethnic humor, particular traits of a specific group are exaggerated and stretched for comedy purposes.
Ribbing, razzing, and roasting in the United States is as commonplace as hamburgers and hot dogs. The wisecrack is our traditional form of the jest. No other country in the world can make that boast. No other country has the freedom of expression, security, or inclination to laugh at itself.
Poking fun, twitting, teasing, and hazing are at the very core of our humor folklore. If you outlaw these comedic forms, you take away the guts, the very essence, of the American sense of humor.
Then what do we do?
Laugh, my friends, laugh.
With sales of over 13 million books, comedian Larry Wilde is now “America’s #1 bestselling humorist.” -New York Times” Other currently available titles include:
THE OFFICIAL LAWYERS JOKE BOOK, GREAT COMEDIANS TALK ABOUT COMEDY, THE OFFICIAL ITALIAN JOKE BOOK, THE LARRY WILDE TREASURY OF LAUGHTER, THE OFFICIAL SEX MANIACS JOKE BOOK, and THE OFFICIAL IRISH JOKE BOOK. And Many More! 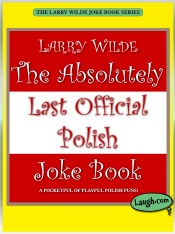