A little known, rediscovered letter:  an SOS from a woman trapped on a Swiss mountaintop in a TB colony with no idea how to escape—that woman being Dorothy Parker.

“Kids, I have started one thousand (1,000) letters to you, but they all through no will of mine got to sounding so gloomy and I was afraid of boring the combined tripe out of you, so I never sent them.” Thus starts a little-known and until now unpublished letter by Dorothy Parker from a Swiss mountaintop. Parker wrote the letter in September 1930 to Viking publishers Harold Guinzburg and George Oppenheimer—she went to France to write a novel for them and wound up in a TB colony in Switzerland. Parker refers to the letter as a “novelette,” yet there is nothing fictional about it. More accurately, the biting composition reads like a gossipy diary entry, typed out on Parker’s beautiful new German typewriter. She namedrops notable figures like Ernest Hemingway and Scott and Zelda Fitzgerald while covering topics running from her various accidents and health problems to her opinions on dogs, literary critics and God. The writing is vintage Parker: uncensored, unedited, deliciously malicious, and certainly one of the most entertaining of her letters—or for that matter any letter—that you’ll ever read.

This edition features an introduction, notes, and annotations on notable figures by Parker biographer Marion Meade. 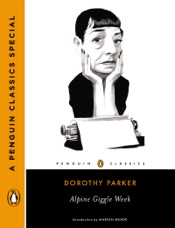